First came the Lindy Hop revival – but now Collegiate Shag is here too, and it’s here to stay. One of the names trailblazing that revival is Barcelona’s own Sandy Lewis. She’s known as being a fiercely talented lead and follow, as well as a universally adored teacher. Her performances have poured creativity and inspiration into the Collegiate Shag world as well as taking the internet, and wider Swing Community, by storm. She’s a name to watch, and we were lucky enough to have time to chat with her, and find out some more about her thoughts and experiences in the world of dance. 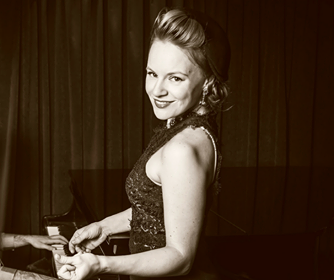 What was your first dancing experience?

My first real dancing memory was at a yearly music festival in Lafayette, Louisiana called Festival International Louisiana. I was with my family watching a local Zydeco band, and dancing in a gravel parking lot with my Dad – I must have only been about 6. There’s never a lack of good, live music in Louisiana.

With all that live music you must have grown up with dance?

Yeah, we have plenty of vernacular dances in South Louisiana, such as Cajun, Zydeco, the Two Step and the Cajun Walz – I’ve been dancing them my whole life, but we never learn them, we just do them.

In the 90s, when the swing dance revival really hit the US, I was in hot pursuit of a Lindy scene, but there was nothing. I ended up taking private classes in ballroom and got some West and East coast swing classes in there too, it didn’t last long though, because there was nowhere to go social dancing.

I got one opportunity, when the Squirrel Nut Zippers played a gig in Baton Rouge – I was so excited to finally get to dance, but there was an accident on the highway that caused me and my friends to miss it. I still have pictures of me sitting on the hood of my car with traffic piled for miles behind me. I was gutted!

When I moved to Barcelona, I was aware of the Lindy scene, but I lived outside the city and it was logistically impossible for me to make classes. Following a breakup years later, I moved closer to the city and stumbled upon Swing Maniacs while walking in the Gracia Neighbourhood – the rest is history.

Now you’ve finally managed to live your best swing dancing life, what is it about the social dancing that keeps you coming back?

I love a playful lead or follow who really connects with me and the music. For me, dance is play – and if we play the same way, we’re gonna have a lot of fun!

With experience with all these amazing dances, what makes the swing dance community special for you?

When we were young, we’d go to the playground and just pick people and ask if they wanted to play. Swing dancing is like that. We all show up with a common goal: to dance and play.

The energy! The very first moment I took my first shag steps I thought, “this is home. This is where I want to be. This is me.”

How did the partnership with Martí come about?

We actually met in our very first Lindy class ever! That was nearly 6 years ago. But in 2015, my shag partner moved back to Ireland and European Swing Dance Championships was coming up. I was desperate for a partner so I could stay on the Barcelona shag team to compete. I called up Martí and asked if I could change his life, he answered with an enthusiastic yes and we’ve been dancing together ever since.

You were really put on the radar with your showcase from Warsaw Shag Festival – were you expecting that from that performance?

Not at all! We weren’t aware of how it would explode, but we got a lot of attention from that choreography and I think it’s still the best one Martí and I have ever done.

Have there been any other real defining moments for you as a dancer or teacher?

God, so many. The biggest one, I think, was a highly personal one that involved breaking away from old ties in order to be able to go out into the world and grow on my own as a teacher and a dancer. The rest of my dance career stems from that; it was traumatic and messy but Martí and I came out stronger on the other side. For a year, we lived inside our little bubble, growing and perfecting our own style of shag, which built up to our showcase in Warsaw.

As a teacher, I define myself on the success of my students, whether it’s the growth as dancers, or happiness as a dancer. One of by best moments recently was at a festival when I guy was ready to throw in the towel – but I convinced him to stay in the class, just to at least observe. Eventually, I got him to get back up and participate. He thanked me afterwards for encouraging him to see it through – it’s something precious that I’ll never forget.

I’ve also been teaching alone a lot lately, as Martí is on vacation, it’s a new challenge for me to face and it’s been an empowering experience. I’m going to Prague soon – and it’s the furthest I’ve gone alone to teach, but I feel blessed and grateful to get to work with all the organisers who are trusting me with their communities. It’s also great to see so many women organising these great events. Women helping women to be stronger and better women – incredible!

Who keeps you inspired?

Chandrae Roettig! She can dance absolutely anything and teach it all to boot. But she’s also one of the most generous souls I’ve ever met and a gem to this community. But I can’t mention her without mentioning Stephen Sayer too – together they’re pure butter, and my shag Godparents. I owe a lot to them.

Also watching Ksenia Parkhatskaya dance is one of the most inspiring things I’ve ever seen. The way she embodies the music is magical to me. We’re so lucky she now lives in Barcelona and I get to take classes with her!

How do you deal with the frustrations and set-backs that come with being a professional dancer?

Nose to the grindstone and work harder. It’s either that or knowing when to let something go. After 11 years of living in Spain, I’ve learned to relax and be a little more flexible about some things. Pick your battles and be kind to yourself.

Finally – what advice would you give to new dancers?

It’s just dancing! Don’t take it all too seriously, people come and go, you’ll get stupid injuries and it’s all part of the show. Just keep coming back. But when it stops being fun, it’s time for a break.

If I’m looking at a new dancer who wants to compete and make a name for themselves, I’d tell them to stay disciplined, and if they’re lucky enough to find a partner, find someone with similar goals to you and work hard.
Film yourself too, it’s good to see what you really look like from the outside, watch other dancers and stay inspired by your creativity. Every day is a school day.

Also – competitions aren’t a true measure of your talent, so don’t put too much stock in them.