Despite being a relatively new kid on the block, Katie has already started to make her mark on the Swing Dance world. She’s been part of a number of performance troupes such as The Dixie Dinahs, The Brat Pack and The Skyliners as well as having placed in competitions all over the world, and she’s a regular teacher for Swing Patrol.

What makes Katie particularly special around International Women’s Day, is that she’s already been taking the stories of the inspirational women in Swing and making sure they’re heard all around the country. But what about Katie?

When did you start to learn to dance?

My first dancing experience was when I was very little and my mum made me go to ballet. It was at a French school in Hong Kong and I was the only girl there who couldn’t speak French – it made me an instant target for bullying and I hated it. I begged my mum to quit from the get go.

I found the Lindy Hop about 5 years ago – my friend tricked me into going. He thought it would be a great place to pick up ladies and took me along his wing woman.

What made you fall in love with Lindy and Jazz?

At first it was the freedom to be goofy and silly. This was the first dance style I had come across where I could be myself – I didn’t have to pretend to be cool or sexy, I could just be me.

In hindsight, I think there is also an element of progression which I found really appealing. There was a clear path to getting better. I could see the dancers who were better than me and I could see what I needed to do to get there.

What makes the Swing Dancing community special for you?

They’re my family. I know – I know it’s super cheesy, but I moved to London not knowing anyone. Thanks to the community, I can go to my local social and know my friends will be there and help make a bad day better means everything.

You form the best relationships with people from all walks of life who share the same passion and will be there to help me make my dreams come true. For example – going to the supermarket in my Pikachu onsie flanked by a multiple unicorns and a dinosaur. That’s what true dreams are made of. 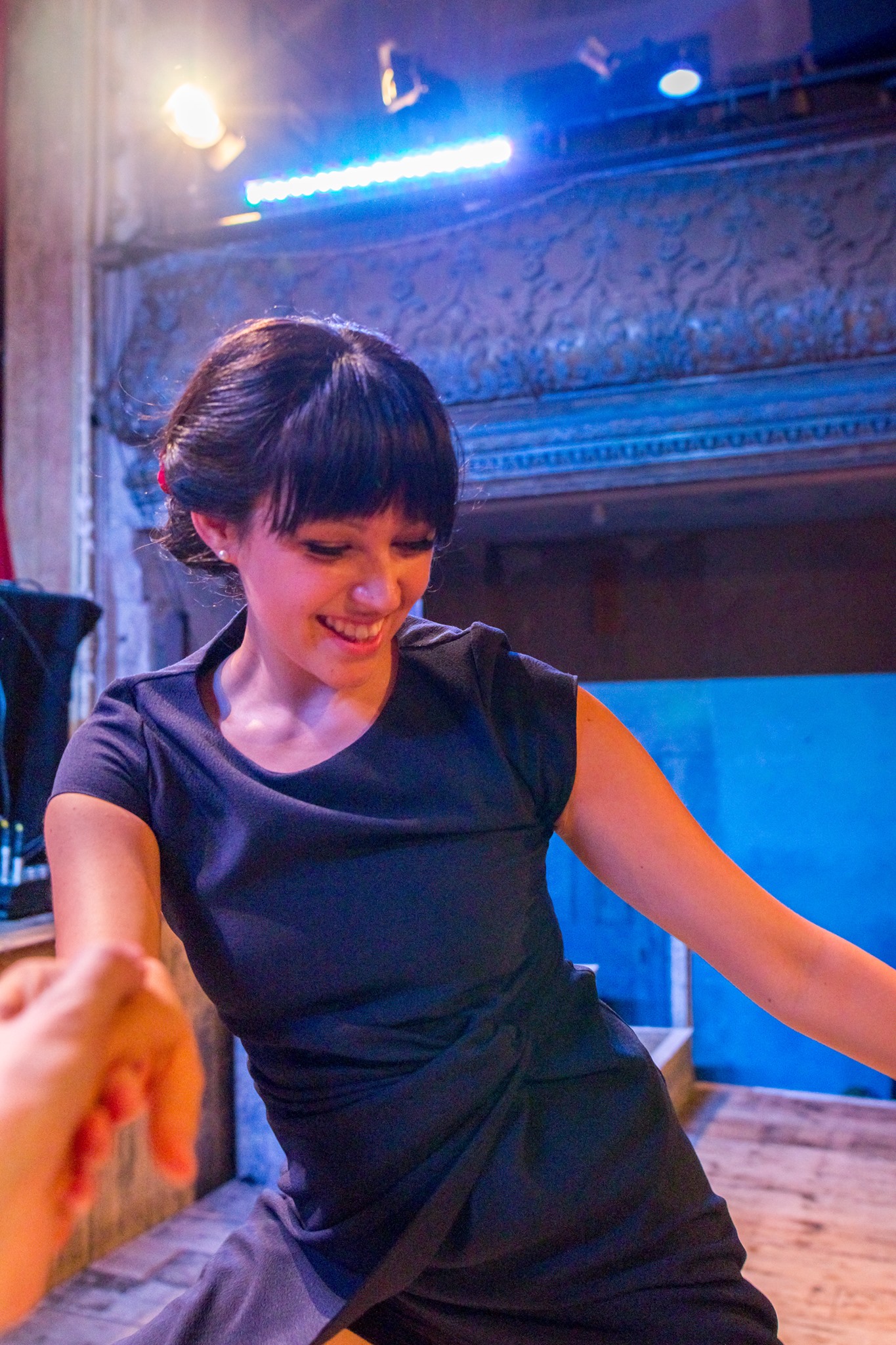 Have there been any defining moments in your dance career that are especially meaningful to you/have really shaped you as a dancer or instructor?

My first ever solo comp is the first thing that springs to mind. It was at London Swing Festival in June 2014 and I really wanted to go to the pre-party on Thursday at Wilton’s Music Hall, but it was already sold out. I contacted the event organisers begging for a volunteer slot, or anything at all that would allow me to go! They said they were offering free tickets to anyone who did the solo comp, so I instantly said yes without really thinking about the consequences. At this point, I think I had done 2 solo jazz classes ever?

I went up there with my heart in my throat, internally freaking out and proceeded to forget how to do solo jazz and ended up doing the running man. It was exhilarating! It was a great lesson in being absolutely out of my depth and doing it anyways. Now, when there’s a solo comp, I don’t even think about it – I just sign myself straight up.

Another one for me was winning the Green Dragon Choreography Competition. My dance partner Fred and I had entered the Green Dragon 3 years in a row. The first year, I didn’t expect us to place at all – but we came second! I was so shocked, I even broke down in tears because I was just so proud of us. The next year we came third and I remember seeing who else had entered and being equally surprised because it was a seriously talented bunch.

And finally, last year, we won it! I was in a ballet class, so wasn’t checking my phone. 2 hours later, I finally saw a bunch of notifications from Fred. We’d won! Ohmiglob! We were going to go to Poland and teach our routine and perform in the legendary Salt Mines 300ft below Kracow! I couldn’t believe it was actually happening.

I am forever grateful for the Green Dragon team for running this competition year after year, and giving the ‘up and coming’ teachers a platform to share their work.

Those little moments when you and your partner have a magical connection and it’s like you can read each other’s minds. Or when you try some new variation or move, and not only does it work but your partner picks up on it and joins in! Or when there’s a really banging tune on and each note is stamped onto your heart! Or when you’re dancing with your friend and chatting on the 3/4 of the swing outs, and you have the best catch ups in little, two beat chunks! Or the electric energy from a live band which infuses the dance floor with light! Or finding a little corner on the floor do bust out some solo jazz by yourself and then you look up to see you’ve started a little solo jazz jam!

How do you deal with frustrations and set-backs?

I used get really easily frustrated with performances and competitions. I wouldn’t watch videos back where I had failed or would get really sad when I made mistakes or missed choreography. I had to actively change my mind-set.

If you saw a still frame from a film could you tell if it was a good film? Of course not – it’s just a single frame. That’s how I think about those set backs now – even if I don’t do as well as I hoped, I know that it’s just one single frame of my dancing. It’s one snap shot at one moment in time and isn’t representative of all my dancing.

Are there any dancers that particularly inspire you?

Aww man, so many! There’s Pamela Gaizutyte for her style and how she exudes this incredible joy with each move; or Remy Kouakou Kouame for his rhythm and how he can make the smallest movement feel huge; Ash Cochrane, for her bad ass dancing and effortless style. When you watch her dance it’s like breathing, she is just perfectly sinking into each move flawlessly.

Then there’s obviously Jo Hoffberg, for her fabulousness and the way she really cares about the community, and wants to build up the next generation. I know I wouldn’t have the confidence to put myself out there if it wasn’t for her.

Ben Cook for his mentorship and his ability to crank out these amazing group choreographies one after another for years. Seriously, this guy runs multiple troupes and creates enough choreography to make an entire stage show, he is so talented it’s incredible.

What advice would you want to give to new dancers?

Don’t be scared to make a fool of yourself! So many new dancers are too scared to go social dancing, or to learn solo jazz, or have a go at a competition. Go be ridiculous, I promise you the rewards are totally worth it.

This is a community of the best people ever. People are kind, supportive and will love you for trying. No one ever remembers the mistakes but you – they might be burned into your memory with the power of a thousand suns but no one else has the storage space for that tiny mistake you made.